Book 1: The year 2020 came into being with me exactly 31% into Iain M. Banks’ Consider Phlebas (1987), the first in a series of nine novels and one short story collection set in his Culture universe. Aside from being the first in a series, it is also my first Banks book. I’m enjoying it so far. It’s quite a rollicking romp through a future galaxy in a state of war. My progress was pretty slow due to a winter English camp starting on January 6, but I enjoyed the rest of the book and it’s rather exciting finish. I finished it 13 days after starting it on Saturday afternoon, January 11. I’ll certainly read more books by Iain Banks, but not just yet. (Read between Dec. 28, 2019 and Jan. 11) 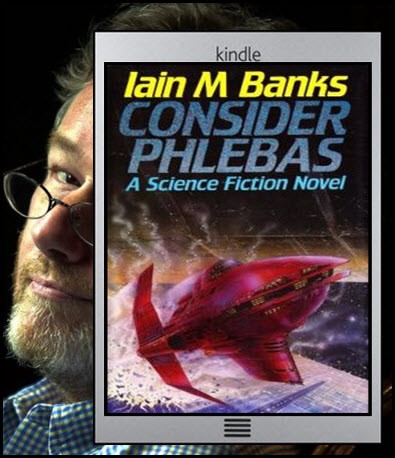 Book 2: Next up is Northern Lights  (1995). Published as The Golden Compass in America,  it is the first book of Philip Pullman’s His Dark Materials trilogy and the source material for a new TV show. I was reluctant to start a new series of books because I have lost count of the number of series I’m in the middle of, but strong recommendations from my office mate and Miranda as well as a peak at the first episode of the TV show sealed the deal. Another connection is the fact that Alexandra Desplat, one of my favorite composers, wrote the music for the 2007 film adaption of the first book. By Monday morning, I was at the 20% mark. This is simply a beautiful book. It took me longer than expected, and I finally finished it on Tuesday Jan. 21 over an omelette pancake breakfast. I’ll read the sequel sooner or later. (Read between January 11 & 21) 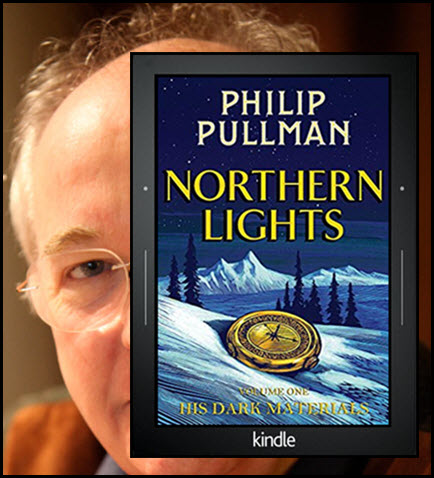 Book 3: I’m part-way through a few trilogies and series of novels (the above is the latest), so one reading goal this year is to finish some of those. With that goal in mind, I began The Nano Flower (1995) ,the third novel in Peter F. Hamilton’s Greg Mandel trilogy. Then, all that’s left to read about the adventures of Greg Mandel are a novella and a short story. It’s now February 1, and I’m 57% through it. January, for some reason or reasons I can’t quite pin down, was a very slow reading month. It took me until February 9 to finish it. I did enjoy it though, and I finished the last 15% on that final day. (Read between January 21 & Feb. 9) 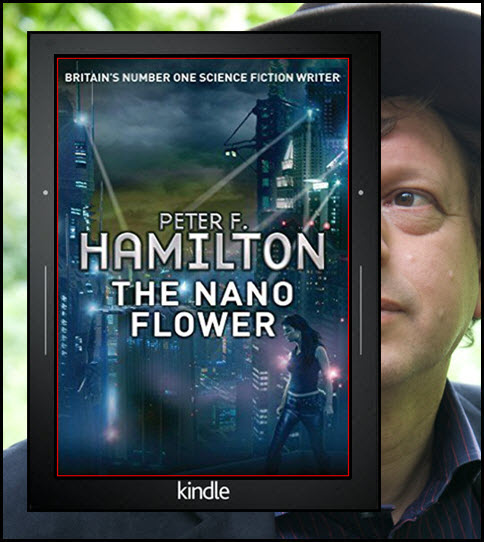 Book 4: And now for something completely different: A Very Stable Genius (2020) by Pulitzer Prize winners Philip Rucker and Carol Leonnig. I sped through the first half, finding the book much more readable and fascinating that I expected. My reading had been slow since late last year, but I’m racing through this. I finished it after work on Wednesday, February 12. Well, the authors had to stop writing at some point, and that must have been difficult with crazy headlines almost a daily occurrence. A Very Stable Genius ends just as the Ukraine scandal begins. I am sure hoping for a sequel. (Read between Feb. 9 & 12 ) 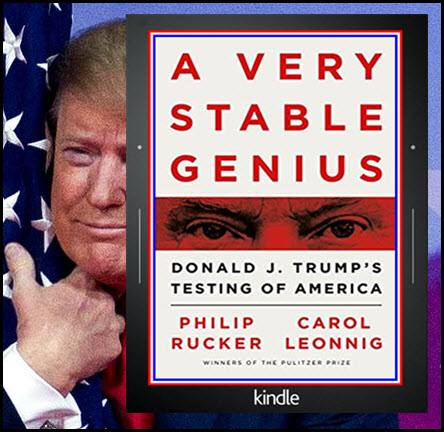 Book 5: I then began Ancillary Mercy (2015), the final book in Ann Leckie’s Imperial Radch trilogy. I read the first two books back to back late last year and had always intended to read the final book pretty soon. I’m enjoying it but being home for the past work has surprisingly left me with little time to read. It’s Feb. 23, and I’m only about a third of the way through it. A week later and I’m only at the 55% mark. Alas, the slow pace continues, but I don’t blame it on book, nor do I blame it on the boogie. I finally finished on a lazy mid-March afternoon. Again, I did enjoy it, but reading at such a slow pace resulted in me sometimes confusing characters. (Read between Feb. 12 & March 11) 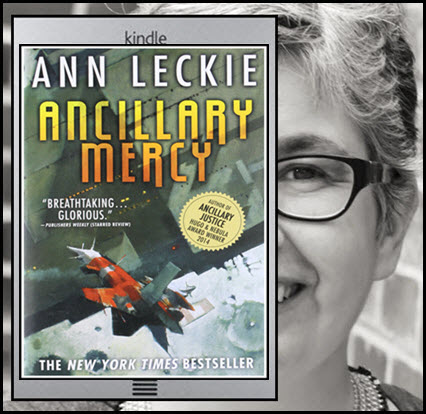 Book 6: Another science fiction sequel is next in the form of Alexandra Monir’s Life Below (2020), the sequel to The Final Six (2018). This should be a quick and enjoyable read regardless of what happens in the world. It took longer than I expected due to the disruptions at work caused by the Corona virus. I did enjoy it though, and it was another book that I flew through once the halfway point was reached. (Read between March 11 & 22) 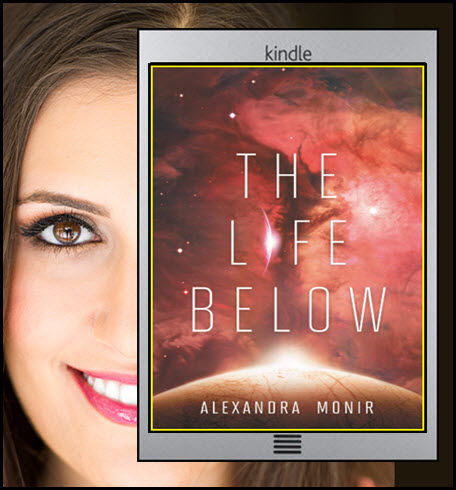 Book 7: The Inner Life of Animals (2017) by Peter Wohlleben sure looks interesting, and I think that’s enough science fiction for now. My slower reading pace continues because of work and all that’s going on in the world. This book did provide some heartwarming and fascinating anecdotes. (Read between March 22 & April 2) 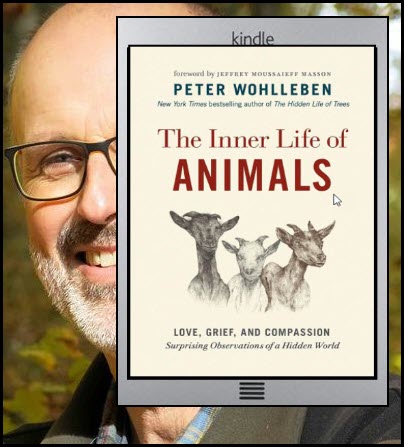 Book 8: I decided to return to unfinished science fiction series with God Emperor of Dune (1981). I don’t really expect my reading speed to return to normal, so this one could take a while.  On May 19, I passed the half-way point. I enjoyed today’s reading, and the slow progress is partyly due to my busy semester teaching online for the first time. Well, the book itself isn’t helping. It’s for the most part not something I would call a page-turner. Finally, at 2:28 p.m. on Saturday May 30, I finally reached the last word and I finally read it. That took a long time, but again, my pace picked up after the half way mark. It’s been too long since I’ve experienced that satisfied feeling of completing a good book. (Read between April 3 & May 30 ) 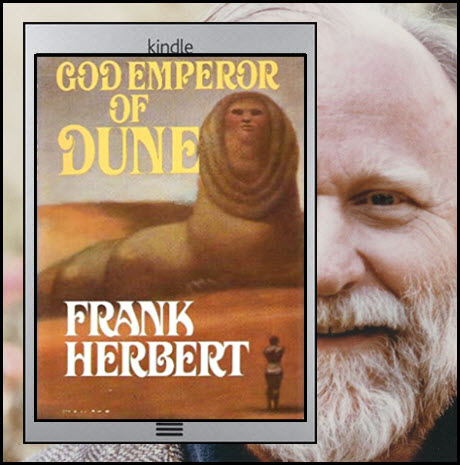 Getting out of the habit of reading regularly while slogging through Dune was starting to bother me. One reason perhaps was that I’m hardly ever using public transport these days, and I always read when on buses of the subway. Of course, this crazy semester is the main reason. I have continued reading through previous semesters that I considered at the time to be “busy”. I miss those semesters. Having said that, I have to admit God Emperor of Dune was hardly the most exciting book I’ve ever read. I just saw it listed last on this ranking of Dune books. “God Emperor of Dune is weird. Really weird” I have to agree. It was not an easy book to read although I did enjoy parts of it.

Book 9: After the slow-going of the above, I returned to the trusted writings of Stephen King with If It  Bleeds (2020), his latest offering. My initial idea was to read just the first of its four novellas and then start another book, but I finished the first one in a day and the second hooked me from the first page. I enjoyed the third and longest story the most, and the last was read in pretty quick time. It felt good to read more even though I’m still really busy with work.   (Read between May 30 & June 7) 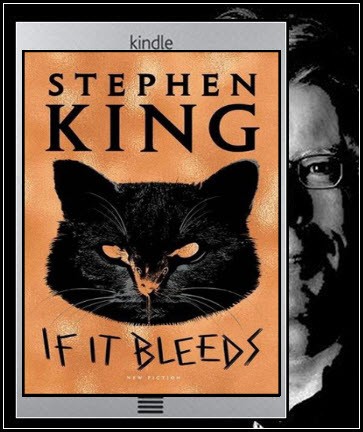 Book 10: Next up,  Firewalkers (2020), a new novella by the very prolific and busy Adrian Tchaikovsky. I decided on something short as I’ve got a busy few weeks ahead of me. I’m enjoying but I’m barely reading a few pages a day. (Read between June 7 &  16) 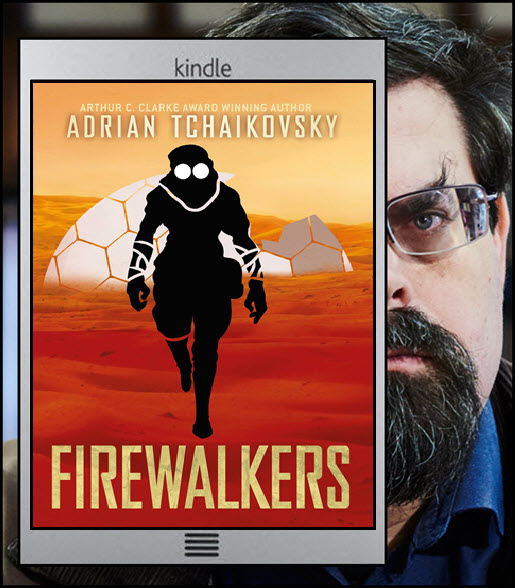 Book 11: The Eye Of The World (1990) Robert Jordan’s massive The Wheel of Time series wasn’t really on my reading radar, and I don’t know why. I was aware of the series, but all I really knew was that it was long (14 books plus a prequel) and that it was finished by another author after Robert Jordan’s death in 2007. I recently stumbled across a few BookTube channels, YouTube channels devoted to books, and after watching a few late at night, I added dozens of books to my TBR (To Be Read) list.  The night before I finished Firewalkers, I dipped my toe into The Wheel of Time by skimming the prologue and the beginning of the first chapter. Then after finishing Firewalkers, I officially began my Wheel of Time journey. To help me get into the world, I found chapter one of the audiobook on YouTube and I listened to it. I also reread the prologue and after reading chapters one and two, I went over them quickly, making notes of names and places and other tidbits which gradually expanded the world.  After orientating myself as best I could, I continued on and found myself totally captivated. (Read between June 16 & 27) 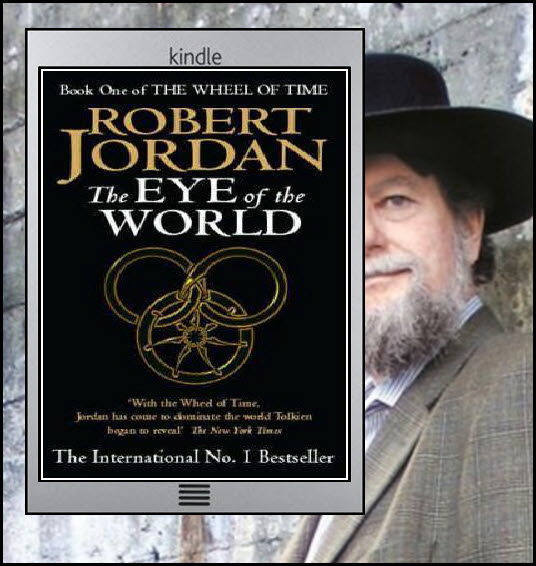 Book 12: Goldilocks (2020) by Laura Lam – it has nothing to do with three bears and bowls of porridge – was next. It’s a book I hadn’t heard of until just a couple of days ago when I saw it mentioned in a YouTube video about new science fiction books. Just a couple of sentences about the premise picqued my interest and it went straight to the top of my TBR list. I took the evening off grading in anticipation of a big day tomorrow, and I napped and read the first quarter. It’s not a long book and as I’ve made progress with grading, I think this will be a quick read. Instead of working all night in a cafe, I stayed at home and finished it Unpredictable and quite moving – it’s been a while since I have read a book so quickly. But alas, now I’m behind the grading schedule I set for myself. I’ll catch up on Monday and put my Kindle away.  (Read between June 27 & 28) 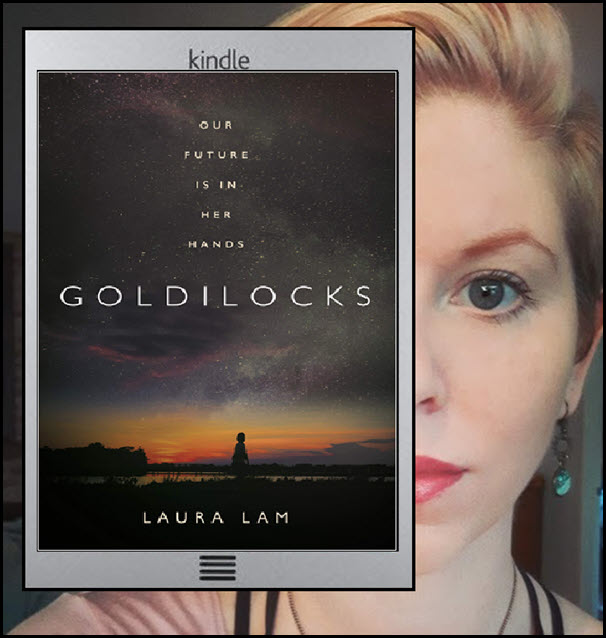 Book 13: A Fisherman of the Inland Sea (1994) by Ursula K. Le Guin. I haven’t read a book by her in a while, so I decided it was time. For no reason in particular I choose A Fisherman of the Inlandsea, a collection of science fiction short stories and novellas. After reading the short stories, which were first, I decided to leave the three novellas for another time.  (Read between June 28 & July….) 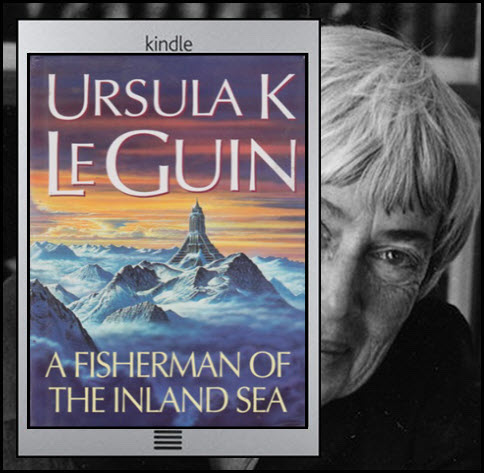 Book 14: Next up: The Great Hunt (1990) by Robert Jorden. I hadn’t planned on starting the second The Wheel of Time book so quickly after finishing the first, but just before bed on Monday night, I decided to see how it begins. And that beginning made the decision for me to continue. I finished it at 2:30 a.m. on July 8. Well, that ending was epic. Fit for the ending of a series let alone the end of book two of 15. I then read the prologue of book 3, The Dragon Reborn, but I’ll take another break before continuing. (Read between June 29 and July 8) 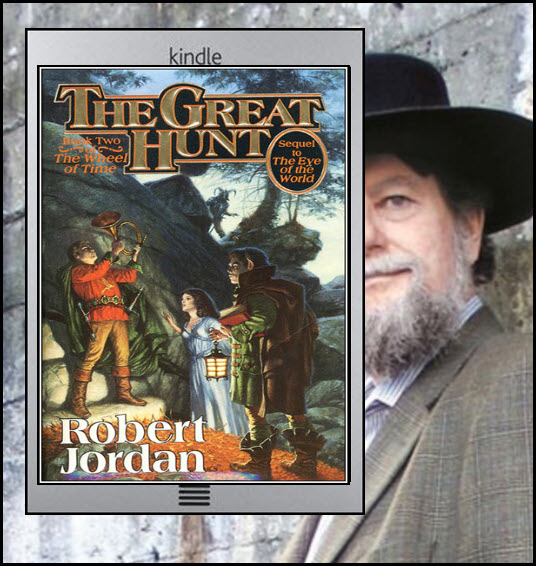 Book 15: The Secret Runners of New York (2019) by Australian Matthew Reilly was next. His books are usually very fast moving and action-packed. Well, not this so far, and I’m 14% into it. I didn’t realize it was classified as young adult fiction when I started. I I have certainly enjoyed other YA books, but so far this hasn’t really grabbed me. I’ll stick with it though as it’s sure to really pick up any page now, and I feel like reading something quickly after the two recent The Wheel of Time books. Once I passed the half-way mark, things did indeed really took off and I finished the book later that same Sunday evening while walking up some stairs to a cafe. I read quite a few of the last pages while walking around – I couldn’t put it down. Safe to say my opinion of the book grew, and incidentally, the author, in an interview at the back of the book, was asked if this is a Young Adult book: “Because its lead characters are teenagers, some people have called this book a YA novel. … To be honest, I don’t really see the novel as a YA title. In the end, I think Secret Runners is a novel, plain and simple, and that readers of any age can enjot it.” (Read between July 8 and July 12) 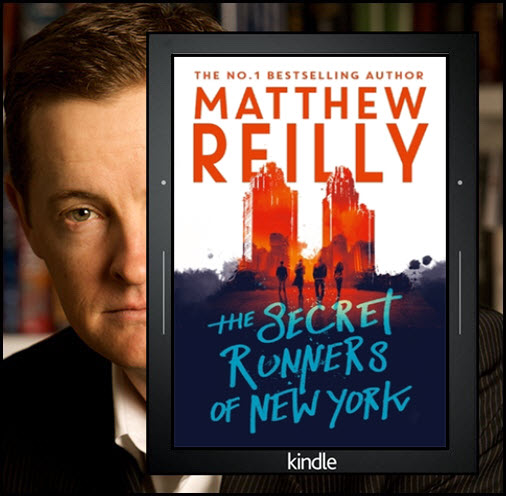