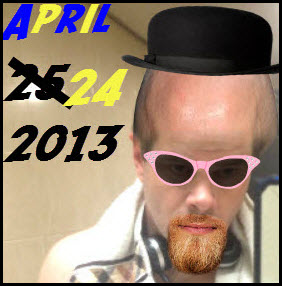 Monday, April 1: April started with a back, lats, traps, and biceps workout.

Tuesday, April 2: Super-fast seven kilometre run in under 35 minutes. It’s been more than a decade since I’ve done that!

Monday, April 8: Chest, shoulders, triceps, and one set of lower back extensions despite some lingering muscle stiffness from Saturday’s workout.

Tuesday, April 9: Legs workout, one of the hardest ever!

Wednesday, April 10: Another treadmill world record: 8 kilometers in under 42 minutes:

Saturday, April 13: A morning weights session for my legs, abs, and sides with an emphasis on the legs.

Monday, April 15: A world record 4.5 kilometer sprint to celebrate the beginning of another week in Seoul:

Tuesday, April 16: An intense weights session after dinner: chest, shoulders, triceps, sides, lower back, and abs.
Wednesday, April 17: My regular back workout (back, lats, trap, and biceps) with some rare forearm curls thrown in at the end.
Thursday, April 18: A legs and slow steep cardio session after lunch:

Saturday, April 27: A 7 kilometre unfun fun run up a mountain and around a zoo: