Thursday, August 1: Lunch at work with my students broke my first fast of the month, which was just over 17.5 hours. 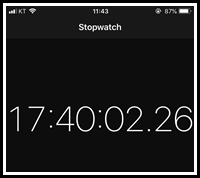 Thursday/Friday (August 1 & 2): I had a post-lunch protein bar and then at 1:14 p.m. I exercised in the morning and didn’t give in to night hunger pains. Pains which pretty much had disappeared by bed time. I had breakfast at home, breaking a fast of 17 hours and 54 minutes. 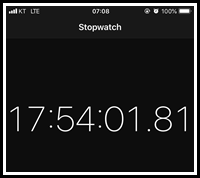 Friday/Saturday (August 2 & 3): My next fast began at 3:20 p.m. after not resisting the free snacks provided for teachers and students. It’s now eight hours later, and I’m not feeling hungry. Sure, I could eat something now quite happily, but there’s no real feeling of hunger. Breakfast was begun at around 10 a.m. 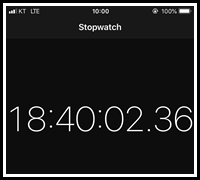 Saturday/Sunday (August 3 & 4): Breakfast was going to be my only meal today, but I changed my mind and had a protein shake and an energy cookie thing just prior to an hour of weights in the afternoon. The fasting clock started at 2:37 p.m. I did have a delicious green tea latter after the gym, but I’ll pretend that didn’t happen. There are only so many regular green teas I can take in a year. Five hours later, at around 8:30 p.m., I decided to eat. The fasting clock began for the second time today at 8:54 p.m. The next 16.5 hours were very lazy ones, so the fast was an easy one. 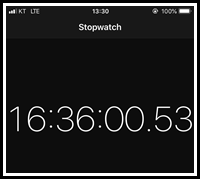 Sunday/Monday (August 4 & 5): Breakfast wasn’t very large, so I followed it up with a chicken and avocado wrap a little later. I  planned that to be the last thing I consumed this weekend, but I cheated and had a delicious green tea latte and a protein bar at 8 p.m. Since I just did that, I’ll try not eat again until tomorrow’s free lunch at work. I did manage to not eat until lunch on Monday. That was 20 hours and 25 minutes since I started the clock four hours before that latte and protein bar. I’ll consider it a dirty fast of 20:25. 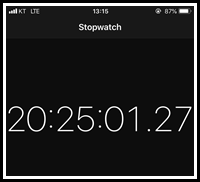 Monday/Tuesday (August 5 & 6): I finished eating at about 1:10 p.m. and the fasting clock started again. However, I had another latte and protein bar at 6 p.m. I’m planning a big weights session a little later, and then I’ll try go until lunch tomorrow without eating again. That’ll be a 17.5 hour fast that was started after a snack instead of a meal and will include a weights session. I’ll be happy with that fast if I can complete it. That didn’t happen. An hour of weights left me unable to resist, so I ate when I got home. The fasting clock started at 10:22 p.m. I think I just need to accept that because of work this is a difficult week to fast. Also, harder weights sessions also leave me feeling hungrier. I’ll just try ride out this week and later in August get back on track. I had planned to skip lunch, but I didn’t. The resulting fast was a short one, but again, I have been exercising more. 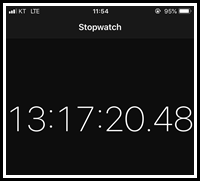 Tuesday/Wednesday (August 6 & 7): Another indiscretion in the form of free snacks at a meeting after work, but I did keep up the exercise in the evening with 30 minutes of weights. The fasting clock began at 4:42 p.m. Breakfast was had before work, and it broke another shorter fast of 14 hours and 40 minutes. 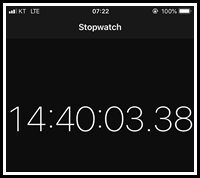 Wednesday/Thursday (August 7 & 8): Today’s free lunch was an amazing chicken burger. I haven’t one of those in a while. A snack just after lunch ended the day’s calories at 12:03 p.m. The fasting clock began again, and it’s still going at 11:30 p.m. This will be my longest fast in a while. I flt hungry neither when I went to bed nor when I awoke. I had a big breakfast though as there is food in my fridge that needs eating before I leave on Saturday, and eating breakfast will make it easier to again try stop eating around noon. 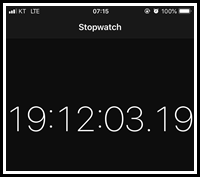 Thursday/Friday (August 8 & 9): I ended up cancelling today’s fast, but in a good way. I had a protein bar before hitting the gym and later instead of a beer at a bar, I had a hot chocolate. Looking ahead to the weekend, it seemed better to then eat at midnight instead of waiting until morning as tomorrow’s lunch and dinner at work are both unavoidable. My next proper fast will be while I’m flying home.

Friday/Saturday (August 9 & 10): Friday was free pizza for lunch and free chicken for dinner to mark the end of camp. Then I had a protein bar and some milk at around 7 p.m. I didn’t start the fasting clock. Breakfast was had about 14 hours later. The fasting clock started after that meal at 10:03 p.m. The plan is to not eat until I arrive in Sydney about 23 hours later. I have gained a little weight of late. Some of it muscle, but I want to stop this recent gradual increase. I ended up eating after 13.5 hours at Kuala Lumpur Airport having decided that I didn’t want to spend my next flight feeling hungry. 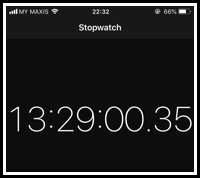 Saturday/Sunday (August 10 & 11): I ate upon arriving in Sydney and the fasting clock started at 11 a.m. I did cheat though in the evening with a hot coconut chocolate, but that was necessary as I was catching up with an old friend at the time. I also had a protein bar at 11:20 p.m. I am at least eating less, and an intense weights session is planned for the morning.

Sunday/Monday (August 11 & 12): The weights session took place in the evening, and breakfast broke a suspect fast 24 hours and 15 minutes since my last main meal. 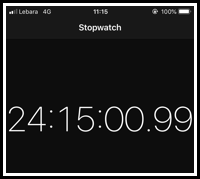 Monday/Tuesday (August 12 & 13): The fasting clock started again at 12:20 p.m. I had another protein bar in the evening, so this is another dirty and suspect fast. I did workout for 80 minutes after that protein bar though. Tuesday’s breakfast broke a dirty fast of exactly 23 hours, and I’m pretty sure that was a clean fast of about 17 hours. 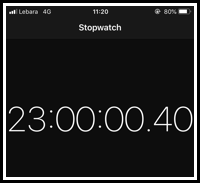 Tuesday/Wednesday (August 13 & 14):  The fasting clock started again at 1:58 p.m. following a delicious sausage roll and a cafe latte. This fast will surely be a clean one. But it wasn’t. I couldn’t resist an 11 p.m. snack of yummy health bars. I made up for it with an hour of weights and cardio Wednesday morning.

Wednesday/Thursday (August 14 & 15):  Lunch with mum should be the last food of the day. I had a protein shake after the gym this morning plus some nuts, and now I’m having a latte while waiting to meet mum for lunch.

Thursday/Friday (August 15 & 16): Another day off from fasting. I need to careful old eating habits don’t return. Fasting will be easier in Malaysia and when I’m back in Korea. However, I should just try not to eat too much while I’m home. I exercised pretty hard for 70 minutes, so that’s a positive.

Friday/Saturday (August 16 & 17): I finished eating at 7 p.m. on Friday night. I exercised Saturday morning as my fast neared 16 hours, and then I broke my fast after 17 hours and 15 minutes. 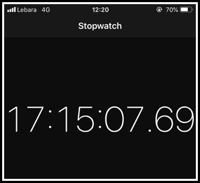 Saturday/Sunday (August 17 & 18): I stopped eating at 5 p.m., and now it’s Sunday morning and my fast is approaching 15 hours. Breakfast broke a fast of 16 hours and 18 minutes, and then it was off to Sydney. 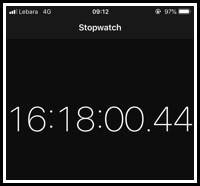 Sunday/Monday (August 18 & 19): Dinner and then ice cream  with my sisters and their families ended at 9:27 p.m. It’s now 12.5 hours and I’m waiting to board my flight to Malaysia. I just had a latte to kill some time, so this’ll be another dirty fast which will hopefully continue until I land in Malaysia. It didn’t as I had a protein bar and some chocolate with me. Well, it was an eight hour flight – nine if you include waiting on the tarmac for an hour.

Tuesday/Wednesday (August 20 & 21): Okay, this is kind of unraveling, but I am in a country that loves chocolate and there is delicious and tempting food aplenty.

Wednesday/Thursday (August 21 & 22): I finished eating for the day at 11:20 p.m. In something of a return to form, breakfast followed 14 hours and 40 minutes later. That fast included an hour of exercise. 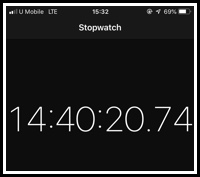 Friday/Saturday (August 23 & 24): The rest of Friday consisted of hot chocolate and shakes plus a protein bar. The fasting clock began at 9:01 p.m. and ended 14 hours and 49 minutes later with a healthy omelette and an unhealthy delicious chocolate shake. 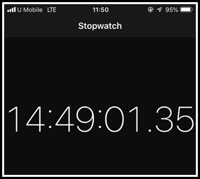 Saturday/Sunday (August 24 & 25): A latte and protein bar followed soon after at Starbucks and the fasting clock started at 12:31 p.m. I hope I can go the rest of the day without eating – I’m certainly due for a longer fast, but that may not be possible depending on what Saturday night brings. I did indeed eat again, but it wasn’t a fill meal. Cheese Twisties and some chocolate – guilty pleasures, Fasting returned to normal with a fast of 17 hours and 19 minutes. And during that time, I visited my hotel’s gym twice. 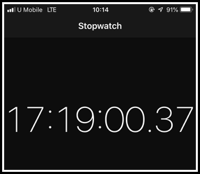 Sunday/Monday (August 25 & 26): Dinner and drinks with a new special friend wrecked my fasting plans, but it was worth it. I also ate a little too much on Monday, It was after all my last day in Malaysia.

Monday/Tuesday (August 26 & 27): Dinner was quite a feast with Yeong-shin, but the fasting clock had yet to begin. Having to stay awake for a 3 a.m. airport taxi also screwed with my eating schedule. To help me stay awake, I had a 1 a.m. meal of a chicken curry puff, a mint chocolate mocha, and some chocolate. The fasting clock started at 1:10 a.m. (2:10 in Korea), and I am determined to make this a long one to help get me back on track. Four hours later, and I’ve cleared airport security and am waiting to board my flight. My tentative plan is to not eat until Wednesday morning after a workout. Is that possible? I should be able to get through the flight back to Korea easily enough. Yes, the flight was no problem as I slept through a lot of it. I’m now on the train to Seoul Station and my fast just passed the 15-hour mark. I decided to break my fast at the 17-hour mark. 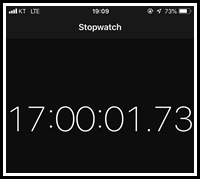 Tuesday/Wednesday (August 27 & 28): The fasting clock began after the above meal, but just before 1 a.m., and after a pretty intense hour of weights, I broke my fast with a protein bar or two and some other snacks. The resulting fast was another shorter one, but it at least included a cardio session near its end. 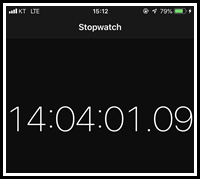 Wednesday/Thursday (August 28 & 29): The fasting at 3:56 p.m. clock started after a coffee and cookie. I’m certainly due for a longer fast. This could be it. It’s now 18.5 hours later, and it’s almost time to eat. The fast was eventually broken after 19 hours and 13 minutes, and that was my longest in a while. 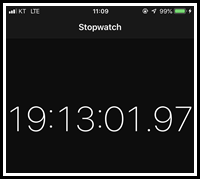 Thursday/Friday (August 29 & 30): About 90 minutes after breakfast, I had a green tea latte and  a small banana muffin. That should be it for the day. The fasting clock began at 1:27 p.m. In other news, I gained a couple of kilograms while on vacation, so I need to reverse that gain. I’m confident I can do it easily enough in two or three weeks. I was sorely tempted to eat before bed, but I resisted. The resulting fast at 21.5 hours was the longest clean fast of the month. 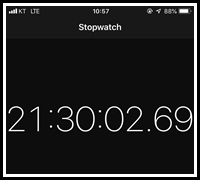 Friday/Saturday (August 30 & 31): The fasting clock started again at 12:59 p.m. after a post-breakfast Chai tea latte and protein bar.  I ate again at 8 pm, and then again just before midnight. It’s now 15.5 hours later, and it’s been one very lazy day so far. I broke my fast, my last for the month, a little later. 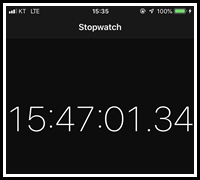 Saturday, August 31: A post-breakfast green tea latte and some chocolate were my last calories for August. They disappeared from view at 4:46 p.m. Looking ahead to September,  I’m pretty sure I can get back on track after the worst month of fasting to date.