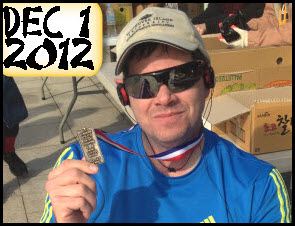 Saturday, December 1: December started with a big bang in the form of a full half marathon in freezing cold Seoul. I was the only runner wearing a T-shirt and shorts – I figured I’d warm up during the race. As it turned out, everyone else was right. Oh well, I enjoyed the morning. It was relatively pain free at least; the pain came later. I finished in record time, by the way. That’s well worth mentioning.

Monday, December 3: A return to saner forms of exercise with a 25-minute back, lats, traps, and biceps workout.

Tuesday, December 4: Back in the gym for a thighs, hamstrings, chest, shoulders, and triceps workout. My legs had finally recovered from Saturday’s successful full half marathon

Sunday, December 9: Back exercising with a vengeance after a few naughty and lazy days off due to the cold weather and a slight case of I can’t be bothered. An hour on the treadmill preceded by a massive back, lats, traps, biceps, and calves workout:

Wednesday, December 12: Six treadmill kilometres after work, some running and some uphill marching while watching another early episode of the re-imagined Battlestar Galactica:

Thursday, December 13: An intense back, traps, lats, biceps, lower back, and legs workout at Keimyung’s free gym with Jeff and Chris. And then nothing until….

Friday, December 21: Back exercising after a long Taiwan break with my sister Liz and her family as they welcomed a new Taiwanese addition to the family. I almost went to the gym twice while in Taipei. While I didn’t quite make it to an actual gym, I did walk around a little bit. Back into it on Friday after work with a 5.5 k treadmill session consisting of some uphill marching and ten minutes of running:

Saturday, December 22: A nice legs and core workout in the afternoon.

Monday, Xmas Eve! 45 cross-trainer minutes followed by a back, biceps, and calves workout:

Sunday, December 30: A super intense weights session Sunday evening to finish off the year: chest, shoulders, triceps, forearms, sides, and abs. I almost worked out on the 31st. I actually made it to the gym despite waking up with the beginnings of a cold, but the gym was closed. I did do a fair bit of walking in the snow and ice if that counts. And that’s it, 2012 is done. 2013’s fitness campaign kicks off tomorrow, assuming this cold doesn’t stop me.