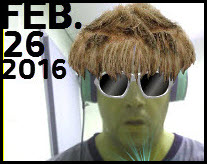 Friday, February 5: After almost going to the gym on Tuesday, Feb. 2, I finally started February’s fitness campaign with a pretty decent cardio workout: 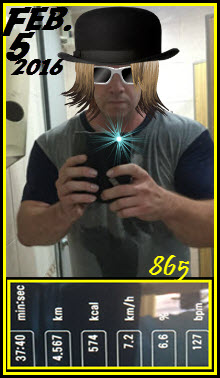 Saturday, February 6: A reluctant legs, sides, and lower back workout after lunch. I skipped exercises that involved moving my arms because of a mysterious swollen elbow. Was I bitten by a biting creature?

Sunday, February 7: A 22-minute weights session (I timed it), which consisted of a long over-due back workout: lats, back, biceps, and forearms. On to the treadmill next for a 17-minute uphill trek that culminated in a burst of speed that isn’t reflected in the following stats: 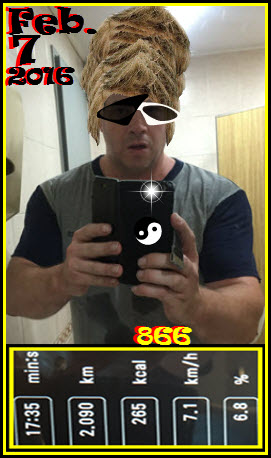 Tuesday, February 9: A short weights session in the evening slightly altered due to my sore elbow: chest (more fly movements than presses), shoulders as normal, traps as normal, and no triceps at all. I turned to Google for a diagnosis, and it looks like I have a wee case of Popeye Elbow. Better get that checked out tomorrow. …

Thursday, February 18: No exercise to speak of per se, but I did begin the task of returning to my regular active lifestyle after 6 days in hospital and a seventh in bed catching up on TV shows and playing World of Tanks. I walked for a couple of hours after a morning writing session, met my North Korean student to help him prepare for next week’s speech contest, and ended the day with 4 hours of band practise. All that left me pretty darn tired.

I have a busy day tomorrow, but I think come Saturday, I’ll be ready to return to the gym. I still have to take it easy with my elbow, but it won’t stop me doing cardio and lower body exercises. That didn’t exactly happen.

Wednesday, February, 24: Finally! A 24-minute cardio workout to dust away all those cobwebs: 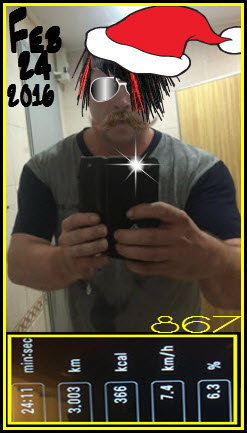 Thursday, February 25: First weights session since being released from my hospital prison. My arm felt fine a few days ago, but when I had my first follow up on Tuesday, the doctor suggested I stop taking the pain killers I was prescribed. They must have worked because soon after I was much more aware of my arm. A light weights session resulted: lats, back, biceps, wrists, calves, thighs, hamstrings, lower back, sides, and light sets for my shoulders and lats. I finished with an 11-minute inclined treadmill trek: 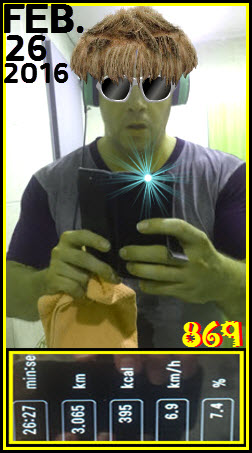 Saturday, February 27: A light chest and triceps workout as those were the movements I not surprisingly couldn’t perform the night before I was admitted into hospital. I also did traps, shoulders, calves, sides, abs, and lower back. Again, not too strenuous, but it felt good to continue the transition back to regular exercise. I finished the session with 14 steep treadmill minutes: 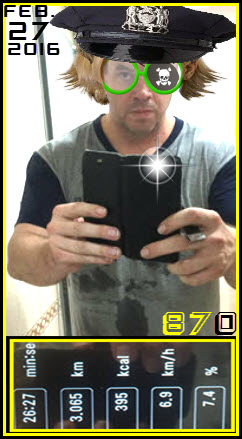 And that was it for the month. I planned to go to the gym on the last day of the month, the 29th, but that didn’t pan out.