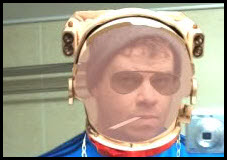 Saturday, January 2: My first exercise session of 2010 was a very light one due to a developing illness. I went to see a doctor in the morning and he diagnosed me with a case of the common cold. I didn’t feel too bad though, just a slight sore throat and a cough, so I decided to do some light exercise to stay active. I planned on going to the gym after visiting the doctor, but changed my mind and decided to exercise at home. Eight-minute abs plus some side exercises followed by a chest and shoulder workout. Then a light 10 km on my exercise bike:

Sunday, January 3: Another pretty light exercise bike session (15 km) while my immune system continues to fight off my cold. A stretch and some calf raises will follow just as soon as I post this pic:

Monday, January 4: Another short exercise bike session. This time early in the morning to take advantage of my first weekday morning not starting work at 7:50 a.m. in 2 months. This cold is still hanging around, so it was a pretty light workout:

Tuesday, January 5: The roads were still wet and icy from the snow fall yesterday, so I walked to work and back. My cold was worse today, plus I had trouble sleeping last night so that was all the exercise for today and I wouldn’t exercise again until Saturday.

Saturday, January 9: Back exercising after what felt like a long layoff. Fifteen km on the exercise bike watching Stargate SG1 and later on (after signing my second rental contract) my first gym session of the year, Back – trying out a new exercise I saw on a recent Micah video – biceps, lower back and legs.

Monday, January 11:  Twenty km on my exercise bike after a very long day of teaching. 4 hours of conversation classes and a 2-hour teacher training class.

Thursday, January 14: My first chest workout in what felt like a very long time. I planned on going to the gym, but opted for a home workout instead. Chest, shoulders, and abs followed by a faster 20 km on the bike watching Stargate Atlantis:

Friday, January 15: The teacher training program finished yesterday so from today on I hope to really pick up the frequency and intensity of my workouts.. I went to the gym in the late afternoon for a short sharp back, biceps, and forearm workout, Then I walked to my evening class and back home again.

Sunday, January 17: Two hours in the gym today, my longest session without working my upper body. Eight km on the treadmill for my first treadmill session of the year. I was going fine for the first 40 minutes and then tragedy struck: the machine stopped! Then I noticed a new a sign on the wall that says sessions are limited to 40 minutes! Argh! Well it being Sunday, it was quiet, and half the machines were not being used, so I restarted it. The photo of the display was taken at the end of my second session with the time and distance from my first session added in yellow text. Abs were next, and I gave my sides their biggest workout ever. Then legs: hamstrings, groin, and calves. I passed on doing quads because I still get the occasional twinge in my left knee when I bend it.

Monday, January 18: Just a walk to work for my evening class and back home again after class.

Tuesday, January 19: Two cardio sessions today for the first time. Twenty km on my exercise bike in the morning (around 8:20 a.m.):

Then to the gym in the afternoon for a massive chest, shoulders, and triceps workout and 2.5 km on the treadmill:

Wednesday, January 20: Technically a rest day, but I still did a fair bit of walking. About 8 km all up walking to work and back twice.

Thursday, January 21: Fifteen km on my exercise bike to start the day and then to the gym in the evening for a short 40 minute back workout:

Friday, January 22: Twenty km on my exercise bike. I had planned on doing more, but decided to call it quits after 30 minutes:

Saturday, January 23: Eight-minute abs and some side raises

Sunday, January 24: I wanted to add some variety to my exercise program and since I didn’t have anything in else that needed doing, I decided to go for a long walk. A really long walk. I strapped on 1.5 km straps to each leg and embarked on a 6-hour trek. The time passed pretty quickly with the help of my iPod – I gave Chris Young’s new score to the Charles Darwin bio Creation its first couple of listens – and my video camera:

Monday, January 25: A short but intense chest, shoulders, and tricps home workout in the afternoon before my evening class. That was the hardest I had worked my triceps at home and they were really sore the next day. I have the equipment at home needed to give my triceps a good workout, but for some reason I never utilized , well those days are over and I’m looking forward to more short home workouts. They’ll be vital over the coming semester when I’ll have less time for the gym.

Friday, January 29:  Back exercising after a short break suggested by a bottle of whiskey, and that’s the last bottle of whiskey I ever listen to. Twenty km on my exercise bike at quite a fast pace. My third fastest time I believe:

Saturday, January 30: Up early and I was in the gym exercising by 8:10 a.m. I stayed for 50 minutes and exercised my back, traps, biceps, hamstrings, groin, and thighs. It must have been a good hamstring workout because later in the day while having coffee with Ally, my left hamstring cramped up and I screamed.