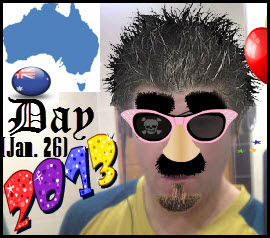 Thursday, January 3: 2013 began with a light legs workout after work. And that was following three days suffering from one of the most serious common colds I’ve ever had the misfortune to be stricken with. Although I feel better today, I fear I have another week or two of blowing my runny nose ahead of me. Not the start to the year I was hoping for.

Saturday, January 5: First cardio workout of the year, just a light 35 minute uphill treadmill marched. And that was sandwiched between the hardest back, traps, lats, and forearm workout of my life.

Tuesday, January 8: Back in the gym for a pure weights session: chest, shoulders, triceps, thighs (extensions and weight free squats and jumps), hamstrings, and calves. That runny nose is still running so I passed on the cardio session I swore I wouldn’t miss.

Saturday, January 12: Back and 35 minutes on the treadmill. My cold has all but gone, so hopefully I’ll be exercising more regularly from now until I next get sick…

Tuesday, January 15: Most intense legs workout ever, which I’m sure I’ll regret tomorrow when I’m forced to walk anywhere. A pretty impressive core workout was next, but I am rather easily impressed, especially when it comes to things that I do.

Thursday, January 17: I didn’t feel like going to the gym today, and that’s why I went. Weights: back, lats, traps, and biceps.

Monday, January 21: To gym before work to make up for a rare exerciseless weekend. 4.5 treadmill kilometers as season 1 of Battlestar Galactice winds to a close again followed by a chest, shoulders, triceps, sides, abs, and core workout. More workouts like that please – and less vegemite toast with heaps of butter:

Tuesday, January 22: A rare lunchtime gym visit for a thighs and hamstrings workout.

Wednesday: January 23: Weights again today: back, biceps, lats, traps, and lower back. A few days off followed due to a trip to Seoul for the Australian Embassy’s Australia Day dinner and the five naughty beers I accidentally drank.

Saturday, January 26: First workout in the gym that just opened right by my house. The rest of my workouts in Daegu (except for Sunday workouts which take place elsewhere because my new gym like so many others is closed on Sundays). My new gym has the same model cross-trainer I used in my old gym so I hopped on that for 45 minutes:

Sunday, January 27: Well my new gym, like so many others in this country, is closed on Sundays. I had no choice but to pay for a single visit to the gym near Mota Outlet, Metro Centre I think it’s called. 7 kilometres on the treadmill. I stopped because the machine died on me at about the 7-k mark. I’m wasn’t impressed, but I continued on with a chest, shoulders, triceps, and calves workout: