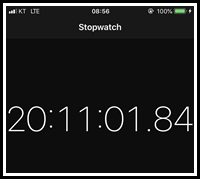 Monday/Tuesday (July 1 & 2): I had a latte a little after breakfast, and I started the fasting clock at 10:46 a.m. That may prove to be too early, and I might make it a “dirty fast” with a protein shake later this afternoon or evening as I’m planning to hit the gym for at least an hour of weights. The weights session was so intense, I decided a protein bar and some dinner was in order. My fast started at 7:13 p.m. and ended 17.5 hours mainly due to my schedule than hunger. 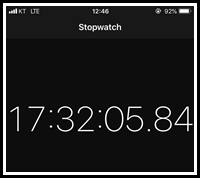 Tuesday/Wednesday (July 2 & 3): Dinner was done with by 6:06 p.m., and Wednesday’s breakfast was begun 17.5 hours later ala yesterday’s breakfast. 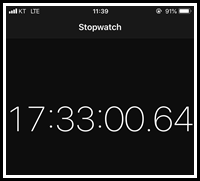 Wednesday/Thursday (July 3 & 4): The fasting clock started again two minutes after noon. I did not eat again until 25 hours and 18 minutes later. By then, I was ready to eat, but I didn’t feel particularly hungry until near the end. Again, a busy morning helped me make it past the 24-hour mark. 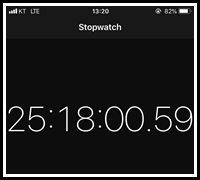 Thursday/Friday (July 4 & 5): The plan was to have a smallish snack first and then a meal not long after, but I ended up eating more than a snack, napping, and having that meal much later than planned. That meal was finished at 5:06 p.m. I feel like I ate too much. I’m due at the gym later this evening, so I’ll try and put those calories to work.  I went to the gym as envisaged, and breakfast on Friday broke a fast just under 18.5 hours. It was another easy fast that was broken more to suit my schedule today than feelings of hunger. 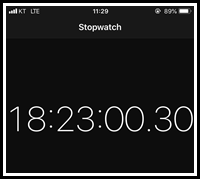 Friday/Saturday (July 5 & 6): That breakfast could be my last meal today. The fasting clock began at 11:54 a.m. I ended up eating again just before five. The resulting fast was a shorter one at 16 hours and 50 minutes. 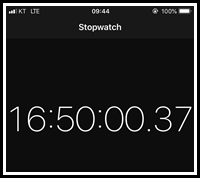 Saturday/Sunday (July 6 & 7): I had another snack several hours after breakfast and then had a second meal after a weights and cardio workout. The fast clock began again at 6:18 p.m. This fast could be one of my longest ever, maybe. It wasn’t. I decided to after 16.5 hours mainly because I had some delicious bananas in my fridge that were going bad. 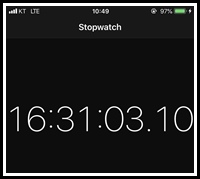 Sunday/Monday (June 7 & 8): I stopped eating at 12:07 p.m. That should be it for the day. Breakfast the next morning was earlier than planned; it broke a fast that was just under 18 hours long. 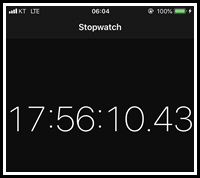 Monday/Tuesday (June 8 & 9): I fell back to sleep after that early breakfast, and then eat again at 12:30 p.m. The fasting clock started at 12:45 p.m. Eleven hours and 10 minutes later,  I gave into temptation. A bite at first, and then I decided to make a meal of it. The fasting clock started again at 12:18 a.m. The resulting fast was a little shorter than normal at 14 hours and 45 minutes. 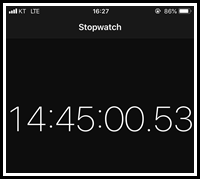 Tuesday/Wednesday (June 9 & 10): Tuesday was a one-meal a day except for that food just after midnight. I started the fasting clock at 4:28 p.m. This fast will be another shorter one due to bananas in my fridge that need eating ASAP and my schedule tomorrow. I’ll have a banana smoothie at around 8 a.m. before heading off to work. My prediction came true: a delicious banana smoothie broke a fast of 18 hours and 24 minutes. 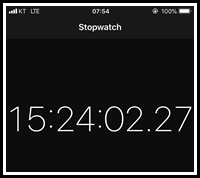 Wednesday/Thursday (June 10 & 11): Lunch was completed at 1:52 p.m. on the first full day of summer classes, and breakfast was started exactly 17.5 hours later. 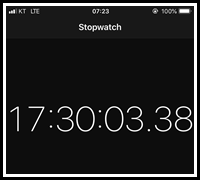 Thursday/Friday (June 11 & 12): I had lunch after class and then a little dessert in the form of a latte and a chocolate muffin. The fasting click started at 1:58 p.m. This fast should be about 17.5 hours. It’s now 8:20 p.m., and I feel fine. I had breakfast a little earlier than I envisaged, but that’s okay. 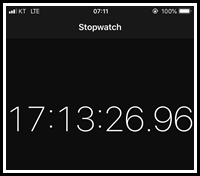 Friday/Saturday (June 12 & 13): Instead of lunch after class, I had a protein bar and a banana in the morning. The fasting clock started at 10:32 a.m. It was surprisingly easy again getting through the day, and as I write this, my fast is approaching 23 hours. Breakfast broke a fast of just over 24.5 hours. 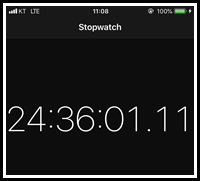 Saturday/Sunday (June 13 & 14): My next fast began at 12:22 after a latte and a chicken and avocado wrap, but seven hours later and after an hour of weights, I decided dinner was needed. The resulting fast was just under 17 hours. 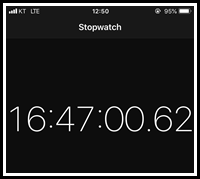 Sunday/Monday June 14 & 15): Breakfast was pretty big, but it was my only meal of the day, and the fasting clock began again at 1:32 p.m. Breakfast was begun 18.25 hours later, and I wasn’t even particularly hungry. 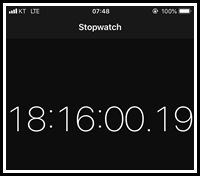 Monday/Tuesday (June 15 & 16): A post-lunch mocha latte ended the days eating, and the fasting clock started at 1:54. Ten hours later and just before I went to bed, I just couldn’t resist some delicious food. It was my first indiscretion of the month, so I didn’t beat myself up over it.

Tuesday/Wednesday (June 16 & 17): Upon waking after that midnight meal, I had breakfast just before 8 a.m. I may go the rest of the day without eating, but I’ll allow myself at least a latte after class. A little later, I was in one of those impossible-to-refuse food situations. It was at least in the form of fried chicken. I went to the gym after that and ate again after that. The fasting clock began at 9:16 p.m. Breakfast was started after class at home 16 hours and 50 minutes later. 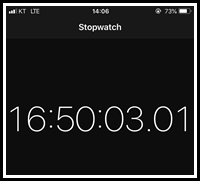 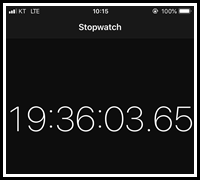 Thursday – Sunday: A little break due to some social commitments and a couple of indiscretions. 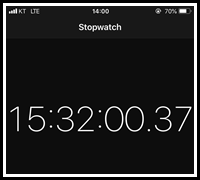 Monday/Tuesday (July 22 & 23): It might just be a one-meal day as my breakfast was begun at 2 p.m., and the fasting clock started as soon as breakfast was history at 2:15 p.m. That was 4.5 hours ago, and so far so good. Well, I ate again at night some eight hours into my fast. I kind of had to eat as I needed help getting through writing evaluation comments for 19 students. It was time consuming, and the food break helped me immensely. It’s now almost 15 hours later, and I feel fine. My inevitable breakfast broke a fast of 16 hours and 11 minutes. It felt good to break through that 16-hour barrier again after a wee break. The fasting clock started at 3:32 p.m., and I’m determined to not break until tomorrow morning or even tomorrow afternoon. 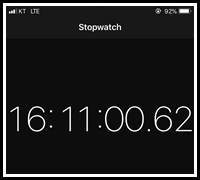 Tuesday/Wednesday (July 23 & 24): The plan to not eat again today fell apart through no fault of my own. With some food consumed, I decided on a protein shake and an energy bar prior to an evening weights session. The fasting clock started at 8:50 p.m. My weight has increased a little this week, so I think a longer fast is called for this coming weekend. Breakfast was started 16 and a quarter hours later, but I admittedly had a few Pringles earlier that were gifted to me by a student. To counter that indiscretion, my breakfast was pretty small. 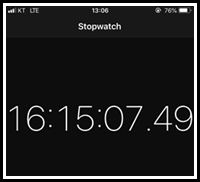 Wednesday/Thursday (July 24 & 25): I ate again a little later and started the fasting clock at 4:12 p.m. Fifteen hours and 41 minutes later, I began breakfast, but to be frank, I had a wee snack in the wee hours of the morning. 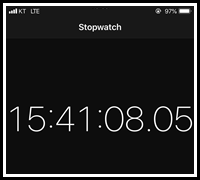 Thursday/Friday (July 25 & 26): Dinner was a pretty large meal, but the other times I ate, I didn’t eat much. The fast clock began yet again at 5:41 p.m. I intended to go to the gym, but Thursday was a long day and it marked the end of a pretty busy 4-day week. I just passed the 17-hour mark for the first time in a while. I was planning to go to the gym this morning, but it’s pouring outside. I spent some time cleaning instead, and I’ll go to the gym this evening. 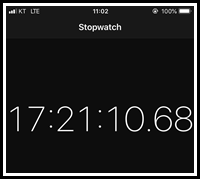 Friday/Saturday (July 26 & 27): A snack at a work meeting interrupted my fast, and then after 70-minutes of weights, I decided I needed a protein shake and a chocolate bar. The fasting clock started at 8:02 p.m. I did have a secret beer in a bar a little later while watching two friends playing guitar, but I didn’t reset the fasting clock. I know that’s illegal but that didn’t stop me. All in all Friday was a pretty low calorie day that included one of my most intense and longest weights sessions in a while. My fast just passed the 15-hour mark. I’m feeling hungry and may eat soon as my fast really begun with a snack instead of the normal large meal. I broke my fast with a rare pancake feast. 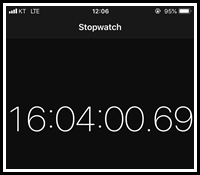 Saturday/Sunday (July 27 & 28): I had a smoothie and a protein bar plus a couple of other snacks after a gym session. The fasting clock began at 6:37 p.m., and a light breakfast of a banana smoothie with a touch of protein was begun 16 hours and 22 minutes later. That light breakfast was on account of a 4 p.m. early dinner appointment. I might have a latte before then, but that should be it. 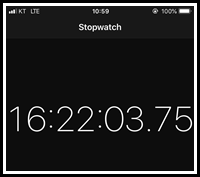 Sunday/Monday (July 28 & 29): Sunday pretty much went according to plan food wise, and the fasting clock started at 4:58 p.m. after some amazing Mexican food. I comfortable passed the 16-hour mark as I was getting ready for work. Breakfast, which was lunch as far as work was concerned, broke a fast of 18.5 hours, my longest in a while. 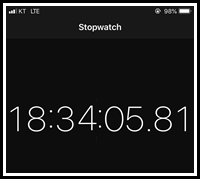 Monday/Tuesday (July 29 & 30): I ate again after work and started the fasting clock at 5:39 p.m. Exactly 14 hours later because of a long weights session Monday evening, I decided I could use some food and protein. 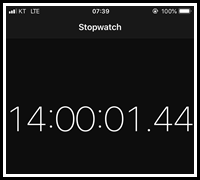 Tuesday/Wednesday (July 30 & 31): My schedule this week is playing havoc with my fasting schedule. I do think it can’t help to vary things up, but today for example, I found myself returning to a bad habit or two. I ate at night, but I also had a pretty intensive workout, and earlier in the day, I was offered food I just could not resist. The result was that I probably ate more food today than all but a few days since I started fasting in June of last year. My weight has crept up a little, and I don’t think all of that increase is muscle. The fasting clock began at 9:11 p.m., and this next fast may have to be another shorter one due to the free lunch provided by the program I’m teaching on. Much to my surprise, I skipped that free lunch. I honestly didn’t think that possible. The resulting fast was a respectable 19.5 hours long. 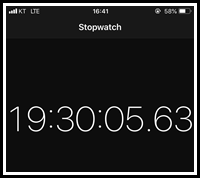 Wednesday, July 31: Wednesday ended up being essentially a one-meal day. The fasting clock began for the last time this month at 6:02 p.m. I made it to the end of the month without eating, so July’s fasting diary must now come to an end.