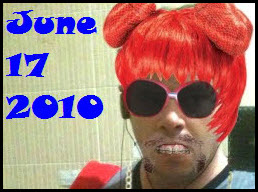 Tuesday, June 1: Seventy-five minutes in the gym to kick off my June fitness campaign: back, traps, lats, biceps, sides, abs, and 2.5 steep km on the treadmill:

Wednesday, June 2: I started my workout with a run on the treadmill at the gym and oops, I think I broke it because it stopped dead after 1.65 km. Luckily the next treadmill survived long enough for me to complete another 3.5 km. Doh! My right ankle, which I badly sprained last August, felt really stiff the next day. After the run I exercised my back, lats, traps, biceps, hamstrings, inner thighs, calves, and a just a few leg extensions because my left knee still hurts on occasion:

Friday, June 4: Twenty-five minutes of abs in the afternoon before my 4 pm class and a late night thirty-minute gtm session in which I trained my chest, shoulders, triceps, and forearms despite waking up from my evening nap with a headache.

Sunday, June 6: I rode to the pool behind HomePlus ( a 55-minute round trip) and swam 1.7 km listening to my wonderful SwimP3:

Monday, June 7: Thirty minutes of abs in the morning, but I wasn’t sore the next day. Drats.

Tuesday, June 8: Twenty quick kilometers on my exercise bike before work watching a disappointing episode of Star Trek called “Whom The Gods Destroy.” Such a promising title.

Thursday, June 10: Drats, I’ve strained my right lat muscle and my lats are my favorite muscles to exercise. It hasn’t felt quite right since my swim on Sunday and at the gym today I tested it out with a light pull down and knew immediately that I had torn it. No more pull ups or chin ups this month and I’ll have to be careful how I exercise my other back muscles. So at the gym I gave them a rest and worked my traps, biceps, lower back and calves plus a steep and sweaty 2.5 kilometers on the treadmill:

Friday, June 12: To the gym a little too soon after dinner at Viva restaurant for a chest, shoulders, and triceps workout followed by 3 kilometers on the treadmill. Sunday, June 13: About thirty minutes of abs in the morning. I planned to do some cardio, but didn’t get round to it. I bought an airconditioning unit at HomePlus instead.

Monday, June 14: Twenty sweaty kilometers on my exercise bike while re-watching season 3 of Lost followed by some calf raises and bicep curls:

Thursday, June 17: Back in the gym this morning for the first tome in almost a week. I almost went yesterday but the heat and laziness kept me away. It was much hotter in the gym and they didn’t have the aircon on so I sweated buckets despite not working out any harder than usual. My right lat isn’t 100% yet, so I gave my back a rest and instead worked chest, shoulders, triceps, legs and lower back. I ended with 3 steep and very sweaty kilometers on the treadmill:

Sunday, June 20: Twenty kilometers on my exercise bike after a mini end-of-semester vacation in Pusan where I ate too much, gambled wisely at Pusan casino, dove in the shark tank at Pusan Aquarium, and bought a dolphin hat:

Monday, June 21: At the gym by 8:40 a.m. for a nice sweaty 65-minute workout. My right lat muscle still isn’t 100% so I skipped pull-downs but managed some other back exercises namely bent over and upright rows plus trap shrugs. Biceps were next followed by forearms, lower back, calves, and 3 steep sweaty kilometers on the treadmill watching a reply of one of last night’s World Cup matches. No idea who was playing: not Australia, not New Zealand, not Korea, not Japan, and not Brazil. Argh I just remembered, Paraguay and some team wearing white. White lost.

Tuesday, June 22: Thirty minutes of abs in the morning watching the latest episode of  True Blood.

Wednesday, June 23: I planned on going to the gym, but had a long nap after work instead.

Thursday, June 24: An hour in the gym this afternoon after eating way too much for lunch at Mr. Pizza. Chest, shoulders, triceps, calves, hamstrings, inner thighs, and 2.5 sweaty kilometers on the treadmill: Sunday, June 27: Back on my exercise bike for 25 kilometers this morning while watching the season finale of Doctor Who. I really needed to exercise today after a terrible few days diet wise. Combination of the World Cup, three nights eating junk food with beer, and a friend’s wedding all made it very difficult to resist beer and fatty food and find the time and energy to exercise. Fun times though – especially Friday night out with a special lady – but my body is feeling like I haven’t been treating it right. I need to try harder to avoid fatty foods, and I also need to pick to the intensity. While I’ve been exercising regularly, I don’t think I’ve been pushing myself as hard as I could. The feeling I have is I’m just barely maintaining my fitness rather than improving it. Taking on extra summer classes hasn’t helped, although that has sure helped my measly bank balance.

Monday, June 28: I started the week with my longest and hardest gym session in a couple of months. About an hour 40 all up during which I worked every muscle group except chest, shoulders, triceps, and forearms. And a pretty quick, steep, and sweaty 3 kilometers on the treadmill satisfied the cardio component:

Wednesday, June 30: I ended June with a quick 10 kilometers on my exercise bike before class and an evening twenty-minute gym session during which I exercised nothing but my chest, shoulders, and triceps: