Sunday, June 2: The month’s fitness program started a day late with a 53-minute weights session: back, lats, traps, lats, biceps, forearms, sides, lower back, calves, and hamstrings. Later that evening I did some more exercises at home: sides, abs, traps, and more bicep curls. I had been avoiding abs due to a small hernia, but the sit-ups I did did not affect that area. I think the hernia came from doing planks last year. Anyway, I think it’s time to bring back sit-up into my workouts

Monday, June 3: A late night session involved a 16-minute run and some weightless squats and leg extensions. I didn’t push myself too much on that run as last week I noticed my shins were a little sore. Shin splints and a reoccurring calf strain were the reasons I got out of the habit of running and instead raised the inclined and walked fast. I might return to those kinds of treadmill sessions if I feel my shins need another break. In other news, I am still quite sore from yesterday’s weights session. 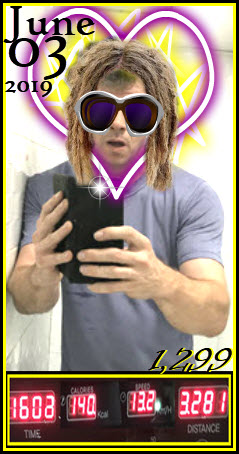 Tuesday, June 4: Another evening gym session, and this was perhaps my most intense chest workout ever. Also exercised: shoulders, triceps, traps, and one set of calf raises. I was suitably sore the next day. 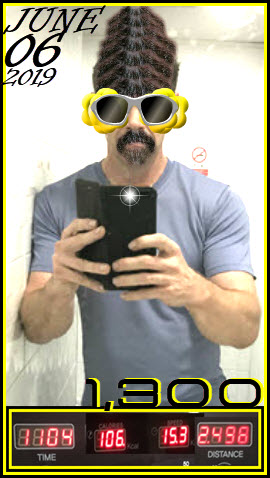 Friday, June 7: Back in the gym around 11 for 42 minutes of weights: back, lats, traps, biceps, calves, hamstrings, and forearms.

Saturday, June 8: A rare home workout that fortunately came about as I didn’t leave myself enough time to go the gym in the morning. I say “fortunately” because it was timely reminder that I can workout well at home. My workout was brief but quite intense as there was no breaks between sets: push-ups (two sets) shoulders (several exercises), weightless squats (two sets), shoulder shrugs for traps (two sets), calf raises (two sets), and one set each of side raises, sit-ups, and lower back extensions. I also did two sets of bicep curls because, surprisingly, my biceps are not stiff from yesterday’s workout. Another benefit of a home workout besides saving time is that I still have the option of going to my gym later, which I did. My second weights session of the consisted of chest, upper chest, shoulders, traps, triceps, sides, lower back, and calves. I also walked just under 10 kilometers. Thus, I earned a day off tomorrow.

Sunday, June 9: It was supposed to be a day off, but I ended up walking just over 22 kilometers. A calorie deficit for sure.

Monday, June 10: Back in the gym after work for a lighter workout: calves, sides, lower back, weightless squats, and a faster 7.5-minute run. 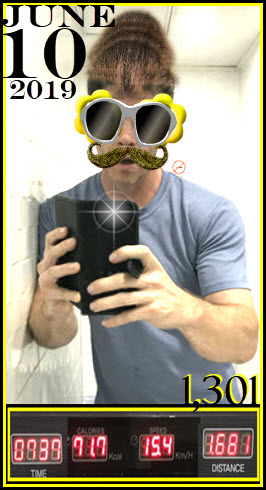 Saturday, June 15: I forgot my gym now closes an hour earlier (7 p.m.) on Saturdays. Hence, my workout had to be quick – about 20 minutes in total. I had planned a treadmill session, but ended up just doing weights: sides, lower back, weightless squats, and leg extensions. That time restriction helped me push myself that much harder than usual.

Sunday, June 16: No gym session, but I did walk a little over 14 kilometers.

Monday, June 17: A 50-minute gym session in the early evening at which I exercised my back, lats, traps, hamstrings, calves, sides (one set), biceps, and forearms. I also walked about 10 kilometers throughout the day and night.

Tuesday, June 18: A 17-minute treadmill session after work was followed by some weightless squats and lower back extensions. I think I have earned a rest day tomorrow. 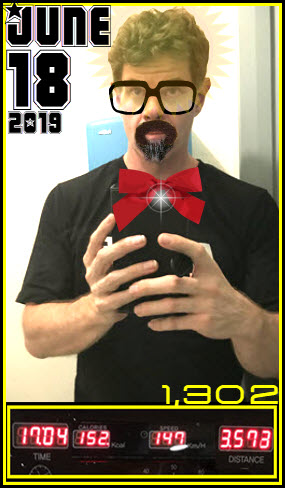 Monday, June 24: A lightening fast 23-minute circuit workout was completed just before 10 p.m. to change things up: chest, shoulders, triceps, calves, hamstrings, sides, abs, lower back, and traps. I also did a set of push-ups in the morning and two more before bed.

Tuesday, June 25: A 20-minute run was followed by some leg extensions and weightless squats. 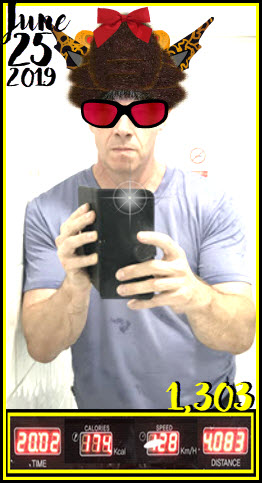 Friday, June 28: I completed tonight’s weights session with my noise-cancelling headphones, and I think that helped me workout harder than normal: lats, back, biceps, traps, sides, abs, calves, hamstrings, and forearms. I skipped lower back extensions because I felt a slight twinge on my left side in that area. I’m sure it’s nothing. I later did a couple of sets of push-ups at home.

Saturday, June 29: The goal for today’s cardio session was to run 3 kilometers in well under 15 minutes. Mission accomplished. 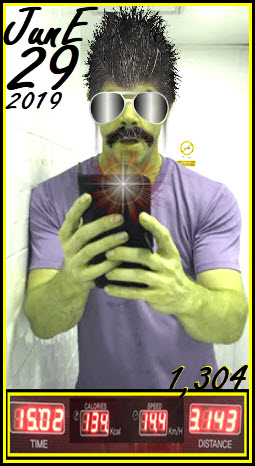 Sunday, June 30: I did two sets of push-ups before my morning shower, and I walked about 10 kilometers. That was it for June.