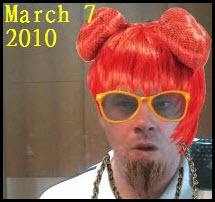 Monday, March 1: March began with a public holiday and that unfortunately meant the gym was closed. That combined with the rain left me with no other option than to exercise at home: Thirty kilometers on my exercise bike while watching Firefly and then a short sharp chest, shoulders, and triceps workout:

Tuesday, March 2: The spring semester started today with a very long first day at work starting at 9 a.m. and ending 11 hours later. I was pretty tired after such a long day, but the last thing I wanted to do was to start the semester without exercising. I exercised at the gym from 8:30 p.m. to 10 and really exhausted myself. Abs, back, traps, lats, and biceps followed by 2,5 km on the treadmill and then 6 skipping sets for a total of 740 jumps (140 110 110 130 110 140). The cardio component was much harder than it should have been and left me sweating much more than usual. I hope I’m not coming down with a cold. I did have a dry throat last night and that is usually a sign a cold is coming, but so far no other symptoms or signs of illness. Still, I’d better take it easy tomorrow and drink plenty of water.

Thursday, March 4: My throat is still bothering me a little, but I felt well enough to jump on my exercise bike for 20 km:

Saturday, March 6: A shorter gym session today at just under 50 minutes. Twenty minutes of abs and then 2.5 km on the treadmill:

Sunday, March 7: Twenty km on my exercise bike while watching the first episode of Dollhouse. I may go for a swim later today, maybe. Update: I did indeed make it to the swimming pool for my first swim since last June or July and did it ever feel good to be back in the water. Peter, promise yourself to swim at least once a week from now on. I took it pretty easy with just 14 laps in around twenty minutes. Instead of trying to swim fast to get my heart rate up, I swam at a slower pace and tried to take as few breathes as possible (and let me tell you that is one sure fire way to get your heart rate up.) I sped up for the final lap while continuing to minimalize my breathing; the result was my lungs almost exploded. A great way to workout!

Tuesday, March 9: I got up extra early and hopped on my excerice bike in time to do 30 km before my 9 a.m. class:

Thursday, March 11: I took advantage of my free Thursday morning and spent an hour 45 in the gym. Three km on the treadmill and then weights: back, traps, lats, biceps, and hamstrings. Skipping was next, eight sets (115 125 125 140 125 165 115 110) and I finished with lower back extensions and calf raises. And all that left me utterly exhausted!

Monday, March 15: I started the week with an early 7:50 a.m. 70-minute workout. 2.5 km on the treadmill followed by chest, shoulders, triceps, and abs. I finished with three skipping sets (160, 130, and 105). That session also marks the start of my half-marathon training program. I originally signed up to run 10 km on April 25, but upped the distance to a half-marathomn yesterday… I’m scared.

Tuesday, March 16: Twenty-five km on my exercise watching Dollhouse before work. A sore throat developed throughout the day, hope it clears up! P.S. I went with a St. Patrick’s Day theme in case I don’t exercise tomorrow, which is looking more likely due to my sore throat…

Thursday, March 18: My cold kicked in yesterday and I felt aweful all day. I felt a fair bit better this morning, so I decided to go the gym for a light workout. More of a stretch really than a workout which I think is what I needed and all I could do with this cold. A few sets of back and leg exercises all with lower weights and fewer sets than normal and a good body stretch. And some abs to finish with. I felt good when I finished and then spent the majority of the afternoon in bed. I’m hoping my cold will have gone by the weekend…

Friday, March 19: Walked to class this morning. Feeling worse today and I lost my voice! Doh, I really want to train for my first half marathon!

Saturday, March 20: (35 days, 23 hours until my first half marathon) I feel a lot better today after a good night’s sleep and plenty of medicine. To celebrate I hopped on my exercise bike for a slow and steady 25 km while watching the latest inspirational episode of The Biggest Loser. And later in the day I did a quick chest, shoulders, and triceps workout at home. I felt better and better as the day wore on; this cold is definately behind me.

Sunday, March 21: Feeling better in the morning I decided to up the intensity: An hour thirty in the gym: 3.5 km on the treadmill, abs, 4 skipping sets (160, 180, 140, and 150), and them some leg exercises making use of the new gym equipment. Thank God they finally have that leg raising apparatus for the lower abs, a body part I really need to work on.  I left the gym and went directly to the pool for 22 laps. And when I got home after all that I was in major need of a nap! I also ate pretty well today and met my weekly weight-loss goal over at stickk.com. Doh, my cold made a comeback in the evening…

Monday, March 22: Still feeling pretty fluey, I decided to still exercise with a light and easy 20 km on my exercise bike watching the latest episode of The Biggest Loser. And what an episode it was! Rick had immunity, but he gained half a kilogram so his immunity was revoked! He now faces elimination tomorrow night with Phoebe! Oh my God!

Tuesday, March 23: Awake ridiculously early and on my exercise bike before 6:30! A nice and steady 30 km while watching Rick get evicted from The Biggest Loser; sad day. Then to mix things up a bit some bicep curls.

Thursday, March 25: At the gym by 8 a.m. for an abs, lower back, and legs workout.  Felt nice to miss the cardio for a change. Tomorrow it’s time for a rest…

Saturday, March 27: Doh! This cold I’ve had for almost two weeks is still hanging around. I planned to go the gym, but felt unusually tired and slept on the subway coming home from Gamsan. I rested a while and then decided that with the half marathon less than a month away I couldn’t afford to be inactive. On my exercise bike for a pretty intense 30 km watching the mid-season finale of Caprica:

Sunday, March 28: I wanted to swim today, but it’s hard to swim with a blocked and runny nose. So instead I exercised at home. A short intense chest, shoulders, triceps, and calves workout plus 20 km on my exercise bike watching The Biggest Loser UK season 3:

Monday, March 29: I started the week well with 65 minutes in the gym Monday morning. I started with 2.5 on the treadmill up my usual steep incline. Weights next: back, traps, lats, and biceps. I ended with two skipping sets of 150 and 115 jumps:

Tuesday, March 30: 8-minutes abs in the morning plus a further 12 minutes of abs and sides.

Wednesday, March 31: Yesterday I took delivery of an amazing little gadget: a SwimP3! I’ve always missed listening to music while swimming and often end my swims more out of boredom than anything else. Those days are now over! I didn’t count the number of laps I did, so I’ll guestimate and call it an even kilometer:

Later in the day I did a quick chest, shoulders, and triceps workout and I walked to work twice in the rain. Once for my 2:20 p.m. class with the teacher trainees, and again for my 8:30 p.m. class.

And that was it for the month of March. Overall, I’m quite happy with the amount of exercise I did, especially considering I’ve had a cold for the past 16 days, and it still hasn’t completely gone away. April’s campaign kicks off tomorrow morning with a visit to the gym…