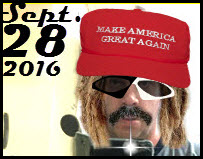 Thursday, September 1: Just a quick 10-minute run to start the month and the new semester. I left home later than planned and had no time for any exercise beyond those ten minutes: 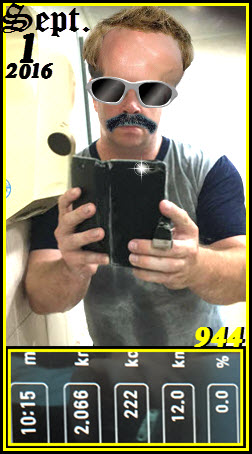 Friday, September 2: A weights session that almost didn’t happen. I arrived at the gym feeling tired, so I read for about an hour, and that didn’t help at all. I summoned all my strength and made it to the weights area for a solid core and legs workout. Cardio is on tomorrow’s menu.

Saturday, September 3: Two steep treadmill sessions. With a presentation to give about cults soon afterwards, the treadmill sessions were necessarily short, but that isn’t to say they weren’t intense; they most definitely were – by my standards anyway: 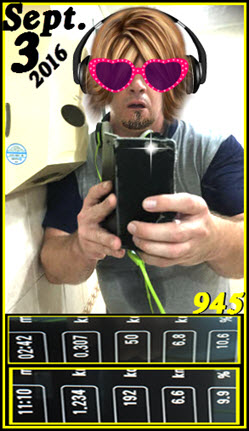 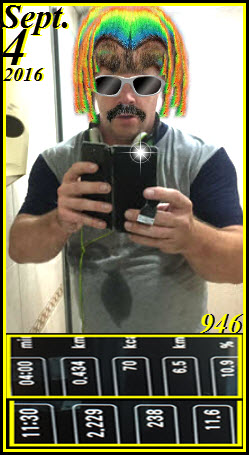 Tuesday, September 6: Having exercised the previous 8 days, I decided I was owed a day off by The Universe. The Universe heard me and granted my wish.

Wednesday, September 7: Two short cardio sessions just before band practice: the first was a ten-minute run, the second was a four-minute climb: 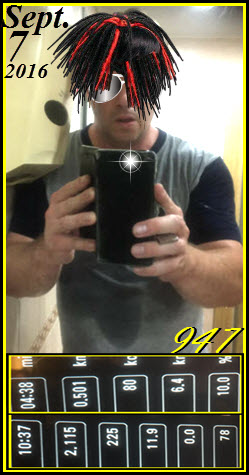 Thursday, September 8: Weights and cardio were on the menu this evening: chest, shoulders, traps, triceps, calves, and forearms followed by a 12-minute super-steep treadmill session. 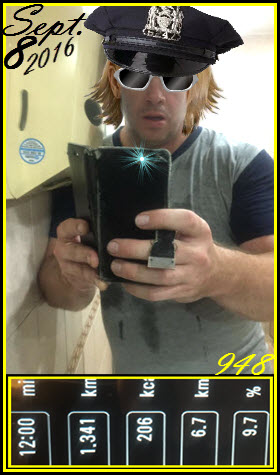 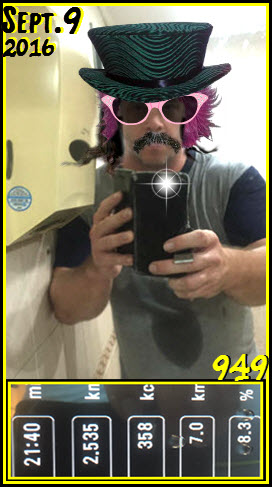 Saturday, September 10: An exhausting legs and core workout followed a yummy and quite healthy lunch. I’m having a wee writing and reading rest at my gym before a planned short and sharp treadmill session. An 11-minute steep trek was the result: 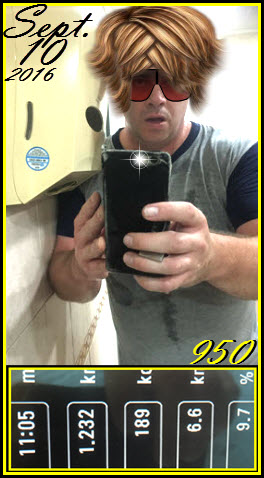 Sunday, September 11: Nothing to report.

Tuesday, September 13: Back on my favorite treadmill: 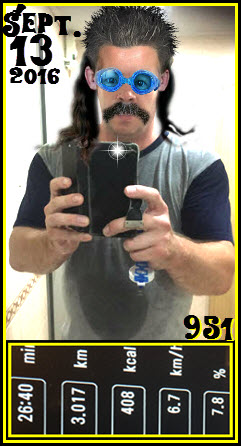 Wednesday, September 14: A 34-minute weights session (back, lats, traps, biceps, lower back, and legs) was followed by a steep 10-minute treadmill session: 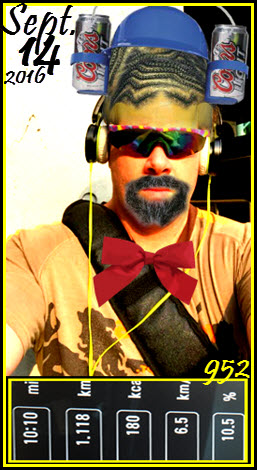 Thursday, September 15: Lots of writing and, apart from a wee late night walk, no exercise to speak of. The gym was closed, and I was rather busy, so the blame is not mine.

Friday, September 16: Weights: chest, shoulders, triceps, traps, and core. Just as I lay on the bench for my first benchpress, I thought to myself, “This is a nice place for a nap.” I could have napped, but despite those lazy thoughts and a feeling of lethargy, the following workout was pretty intense. No treadmill session due to a possible slightly strained calf.

Saturday, September 17: Calf feels fine, but I woke during the night with the beginnings of a sore throat and a slight headache. Hence, I took it a little slower on the treadmill. I hope the bug I felt is just a 24-hour thing. Fingers crossed. 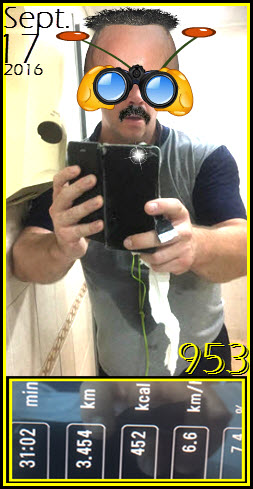 Sunday, September 18: Still a dull headache and somewhat of a sore a throat, but I felt fine apart from those two non-life-threatening symptoms. Just weights: core and legs.

Monday, September 19: I almost went to the gym in the evening, but some work and some cult shenanigans kept me away.

Tuesday, September 20: I was all set when I left work to simply go home and take a long dream-filled nap. My cold symptoms haven’t worsened, but they are still hanging around. And then I steeled myself and walked to the gym. A 21-minute treadmill session was the result of my courageous decision. 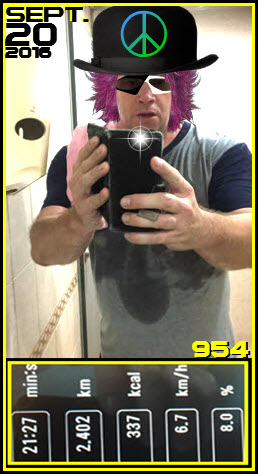 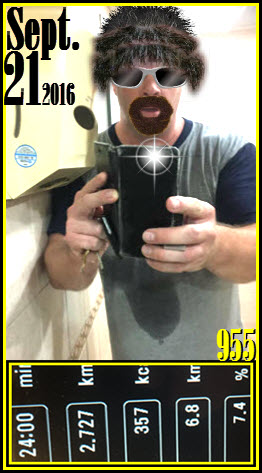 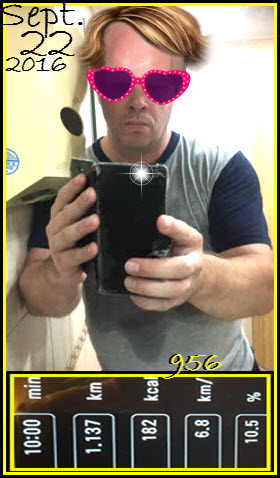 Friday, September 23: A very lackluster back, biceps, lats, legs, and lower back workout due to an inexplicable ab soreness. Did I play guitar for too long last night?

Saturday, September 24: A short cardio session due to a serious lack of time. 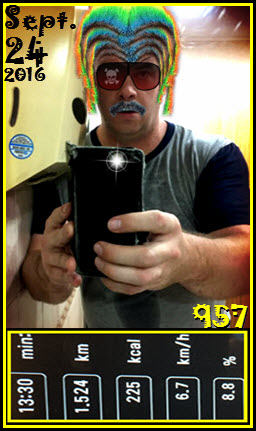 Sunday, September 25: My gym was closed, but I was too busy to exercise anyway. 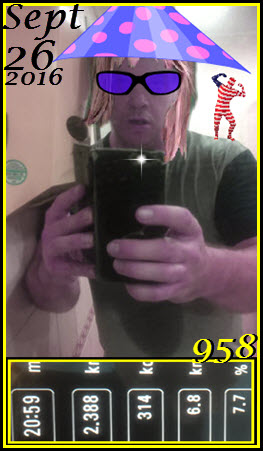 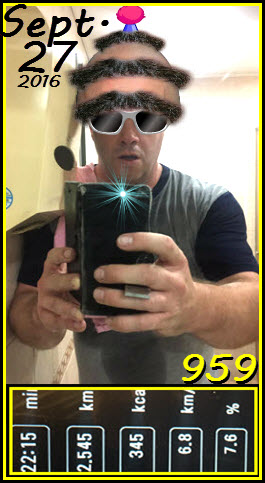 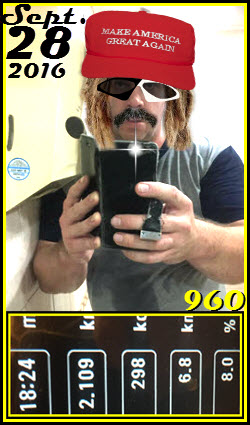 Thursday, September 29: My planned gym session was replaced at the last minute by a trip to the hospital. Last week’s ab strain came back to haunt me in a big way!

Friday, September 30: Thankfully, my ab injury only hurts when I cough, sneeze, laugh, or try to move too much when lying down. Hence, a cardio session was doable. Hence, I did it: 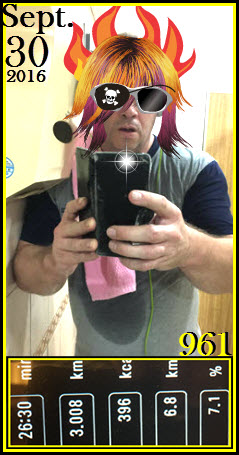