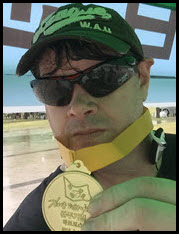 On Saturday April 25, I attended a screening of Ann Shin’s documentary “The Defector” which traces the harrowing journey of a group of North Korean defectors as they endeavour to escape China, where they face the risk of deportation back to North Korea, and make their way to South Korea via the Golden Triangle and Thailand. Here is the trailer. Below that, an interview with Ann Shin:

The event was hosted by the North Korea Human Rights (NKHR) Rescue Fund, an NGO based in Seoul that raises money to facilitate the safe passage of North Korean defectors from China to South Korea or to another safe country. Here are two more related links here and here.

At the event sign-in desk, I was informed about an upcoming marathon to raise money for their rescue projects. It had been over a year since my last half marathon, so the time felt right as did the cause. Although my toe suffered an horrific cut a week earlier and I wouldn’t be able to start training for another week, I signed up for the half marathon – the longest race on the day. Not that I would have attempted a full marathon if one had been offered. I set up the obligatory fundraising page and began annoying my Facebook friends and Twitter followers.

The race, which was originally scheduled for June 14, was postponed until July 12 dues to the MERS outbreak. I wasn’t worried about catching MERS, but I was quite worried about attempting a half marathon in the middle of summer.

I wish that read $45 instead of $50. Well, I did spend a bit of money at a garden party on big bottles of beer a couple of months ago if that counts, and I think it does as that money went towards the goal and I spent way more the $5. I also inspired a few others to run who all raised more money than I did. How they did that, I just don’t know. The moral of the story is that there’s more to fundraising than begging on Facebook and Twitter six or seven times, although I really don’t know what else I could have done. I did get a whole lot of Facebook likes though, perhaps more than most. I was pretty happy about that.

Back to the race: Instead of the expected blistering heat (it was still quite hot), I had to contend with rain, a strong head wind, and water-logged shoes. My waterlogged shoes felt like they had gained a couple of kilograms, and I got blisters as a result. No blistering heat but two heavy blistering shoes. Each of the last 10 kilometers felt like 10 kilometers. Hence, my time of 2 hours 44 minutes was my slowest and walkiest half marathon ever. And to be honest, it was slower than most other runners, but I at least beat a few old people.

Of all the half marathons I’ve done (I think 5 in total?), this was by far the most painful and the least amount of fun. It was a nightmare to be honest, but it was for a good cause, and I just love collecting gold participation medals. Here are some pictures to remind me of the day when I’m old and gray and feel like remembering my glory days:

Smiling before the race, oblivious to the pain that awaited me:

I downed one of these after 6 and 12 kilometres. I don’t think they helped, but maybe they did. I have no idea. All I know is they tasted horrible.

Six kilometers to go. So near, yet so far. And by golly, did my blistered feet need that ambulance pit stop!

I made it! Sure, I walked some of the way, but who didn’t?

A close up of that beautiful gold participation medal:

While the organisers promised there would be refreshments on offer at the end plus some socializing activities, everyone had gone by the time I crossed the finish line. Ergo, they lied:

Join us after the race at the NKHR and R4R tent! We’ll have refreshments, and you can mingle with other runners and NKHR staff and volunteers!

Come on, my time wasn’t that slow!