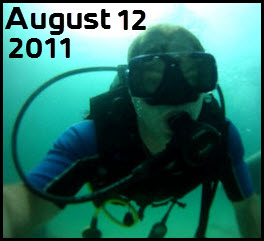 Tuesday, August 2: August began auspiciously with a short sharp workout before my 11 a.m. class. Chest and shoulders were first and then, because I was running out of time, I skipped triceps and jumped straight onto the treadmill for a very steep and quite quick 2.5 kilometers:

Thursday, August 4: A short weights session at night to take care of my abs, lower back, sides, and triceps.

Friday, August 5: I picked up the intensity tonight to help me sleep on my 3 a.m. bus to Incheon. I travelled 3.5 kilometres uphill on a treadmill and then I exercised my back, lats, traps, biceps, hamstrings, and thighs:

Sunday, August 7: I used the free outdoor gym at Paradise Palms resort for the first time giving my chest, shoulders, triceps, and abs a much needed workout. Then, after a nap on the beach, I set out on a 3-hour island trek with sun cream on all exposed body parts except my calves which got really really sunburnt:

Monday, August 8: Just a few sets of calf raises after I had watched 2.5 hours of mind-numbing PADI Scuba instructional videos. I promise to never ever shorten “visibility” to “vis” like they did in the video. If that means failing my Scuba license, so be it.

I then took a short break from exercising to enjoy the rest of my vacation and recover from nasty flipper blisters and 3rd degree sunburns.

Thursday, August 18: After arriving back in Korea at 6:30 a.m. after a sleepless night in the sky and after starting my new job an hour after I arrived back home, I dragged myself to the gym at around 9 p.m. when I all I really wanted to do was sleep. But I needed to get back into an exercise routine and I think I took the first steps towards accomplishing that with a solid weights session in which I exercised my back, lats, traps, and biceps.

Sunday, August 21: Back into cardio training with a 30-minute jog in my Merrells and after that, following a much-needed nap, a 1.1 kilometer swim:

Monday, August 22: A late night intense workout for my back, lats, traps, biceps, and lower back. Pain will be here tomorrow.

Wednesday, August 24: After being forced to eat free pizza for lunch AND dinner at work today, I really had no choice but to race to the gym straight after work and sweat out those evil pizza calories. And that’s exactly what I bravely did: 3.5 km on the treadmill, which was my first treadmill session in a while and my first in my new Merrell barefoot running shoes, followed by a traditional chest, shoulders, and triceps workout:

Friday, August 26: I was tired after my first full week in my new job, but I dragged myself to the gym late at night for a core workout: abs, lower abs, sides, and lower back.

Saturday, August 27: A longer 85-minute workout to celebrate the beginning of the IAAF World Championships. Four kilometers on the treadmill sandwiched between a back workout: lats, traps, biceps, and upper back and a legs workout: thighs, hamstrings, and calves:

Monday, August 29: I started the week well with a sweaty one-hour workout after work that included 4 steep kilometers on my favorite treadmill followed by a massive chest, shoulders, and triceps workout:

Wednesday, August 31: I ended the month with 4 steep kilometers on a treadmill and about 15 minutes of lower back, sides, abs. I also jogged at a steep incline for the first time, admittedly not for very long:

Well August sure was a different and memorable month: I finished teaching at Keimyung, spent 12 days in Thailand, and completed two weeks in my new job. Given all that, I’m rather pleased with my exercising efforts this month.  My weight has crept up slightly, but I expected that considering my two weeks in Thailand and the time spent adjusting to my new job’s hours. I have no problems starting work at 8:30 in the morning, but going to the gym before work has been another matter entirely. I still hope to get into the routine of exercising at 7; perhaps next month. To be continued…