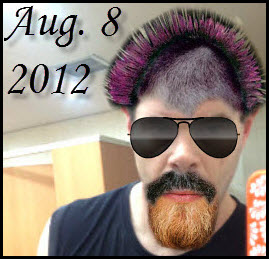 Wednesday, August 1: My vacation get-fit program continues into the very hot month of August and began with a really hard weights session: back, biceps, traps, lats, forearms, sides, lower back, and abs plus the usual skipping sets. I also rode about 20 kilometres on my bike, but that was too leisurely to warrant a cardio diary photo.

Thursday, August 2: A seven-kilometre treadmill run followed by calf raises and quite a few skipping sets. And a total of 15 kilometres on my bike throughout the day:

Friday, August 3: Chest, shoulders, triceps, and skipping in the gym quite early and then to the pool for a leisurely 1 km swim (my shoulders were tired). And according to my new bike’s new computer I pedalled 17.5 kilometres throughout the day: Saturday, August 4: Just a leisurely 17 km bike ride to Home Plus in the evening to pick up a new gym shirt.

Monday, August 6: 55 minutes on my favourite cross-trainer watching an episode of The Mentalist, a legs workout, some skipping, my first ever Pirates class (and to be frank, my last), and all up throughout the day I rode 22.5 kilometres:

Tuesday, August 7: Up surprisingly early and since it felt surprisingly cool, I decided to take my newish bike for a more significant ride. 41 kilometres in total, pretty much a full marathon: Wednesday, August 8: A 2-hour workout today: 8.5 kilometres on my favorite treadmill followed by a back, biceps, traps, and lats workout with some skipping to wrap things up:

Thursday, August 9: Triathlon day! A 1.3 kilometre swim,  a 6 kilometre run, a 25 kilometre bike ride, and some weights (legs) and skipping. I love being on vacation!

Friday, August 10: An easier day today with just a chest, shoulders, and triceps workout followed by some  more skipping.

Saturday, August 11: A world record 95-minute cross-trainer session with an episode of The Mentalist helping pass the time, and that was followed by more skipping and a lower back workout:

Sunday, August 12: Boxing Day! My first time using the gym at the pool I go to. They have a punching bag and a machine for seated calf raises. And I surely need that as those are the muscles (both legs) I’ve strained in the past while running. I need to strengthen those babies up if my half marathon career is to continue. So today’s workout consisted of some bag punching, skipping, calf raises, abs, and a 1.3 kilometre swim:

Monday, August 13: I walked to the gym (7 kilometer round trip) and did a really heavy legs workout and I ended with quite a bit of skipping.

Tuesday, August 14: A huge back workout, a ton of skipping, and 5.5 treadmill kilometres:

Friday, August 17: I almost made it to gym, but when I was almost there I decided it was the last place in the world I wanted to be so I turned around and rode home.

Saturday, August 18: Nine treadmill kilometres today in 62 minutes. I spent the first 15 minutes walking up an incline watching Flight of the Concords season 2 episode 2 on my iPad. I jogged/ran the rest of the time. A little skipping afterwards and a light leg workout: Sunday, August 19: A 1.2 kilometre swim followed by some boxing, a little ab work, and some calf raises. And that’s it, vacation’s over: