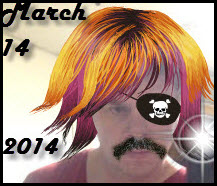 Sunday, March 2:  I started March with a pretty intense weights session at the Hamilton Hotel: back, biceps, lats, traps, forearms, and calves. I had hoped to start March’s campaign the day before, but I forgot that March 1 was a public holiday, and my two local gyms were both closed. Lazy gyms and lazy gym staff!

Tuesday, March 4: A quick chest, shoulders, and triceps workout. And no more exercise until Saturday due to a 6-hour TV interview shoot, a trip to Immigration, and an orientation for my morning classes. Busy few days!

Saturday, March 8: A 5.8 kilometer run that was tragically cut short by Mother Nature. Once I had taken care of her, I continued with abs, sides, lower back, lower abs, and some skipping.

Sunday, March 9: A huge weights session that began with calves and traps and finised with lats, back, biceps, hamstrings, inner thighs, and forearms. And I finished with a much-needed and well-deserved large Smoothie King almond banana protein shake with extra protein.

Friday, March 14: A shorter than planned fast run (1.7 kilometers) followed by sides, lower back, hamstrings, and calves. O’m glad I made it to the gym because I almost didn’t. Although I wasn;t quite in a workout frame of mind, it was good to get the heart rate up and move some muscles.

Saturday, March 15: A quick back workout before lunch. All the usual suspects: back, lats, traps, and biceps.

Monday, March 17: I should have run today to get a genuine St. Patrick’s Day cardio photo, but I just did weights instead: chest, shoulder, triceps, abs (upper and lower), and calves. I guess the missed run was due to Irish Paul staying at my place Saturday night ahead of the APAIE conference. You can’t have a quiet night with an Irishman on a St Patrick’s Day weekend. There are lots of familiar names and faces from my old job in Korea this week. Looking forward to catching up with as many as I can.

Tuesday, March 18: A 2 kilometer run and some weights: sides and lower back. The run should have been longer, but it was interupted by… well that’s a story for another day.

Wednesday, March 19: I was so close to missing this workout. I took an afternoon nap that almost turned into a marathon stay-in-bed session. However, I made it out of bed in time to arrive at the gym 40 minutes before it closed. With no time to waste, I got stuck into it with a 1.2 kilometre spring and my usual back workout.

Friday, March 21: A 12.5 kilometer run which was I think my longest treadmill run ever. All in preparation for a half marathon on March 30:

Saturday, March 22: A super weights session with a bit of variety today: shoulders first, followed by chest, triceps, and lower back extensions. It felt good to vary my routine up a little, and I think my shoulders got a better workout as a result.

Sunday, March 23: Back to Itewon for my regularish Sunday workout which today consisted of a 3.6 kilometre uphill trek and weights for my legs, calves, and forearms:

Wednesday, March 26: A short 2.5 kilometre and some (well quite a lot actually) weights: back, biceps, traps, lats, sides, and lower back:

Sunday, March 30: Back to Daegu and my old place of work Keimyung University to participate in the half marathon part of Keimyung’s 60th anniversary celebrations. Slow and steady, slow and steady…